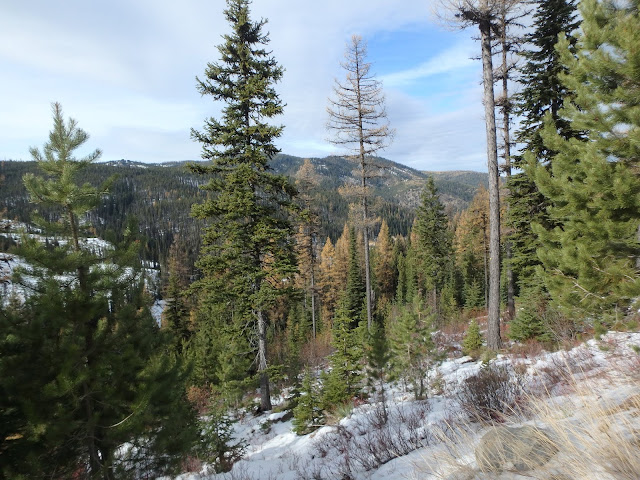 Colleen from the Lolo Pass Visitors’ Center had kept me updated on conditions and on Friday advised that there probably wasn’t enough snow to snowshoe and that ice cleats may be useful. Conditions that persisted until Sunday, we had cleats we never needed, and each took a ski pole. The option to change this to another place wasn’t very good as it is hunting season in Montana. In the parking lot we discussed options on where to go, down by Pack Creek would probably be brushy. Down Pack Cr. Rd was an option, but we decided on going up the road that comes off of the pass, by the snow plow turnaround, that goes up the State Line Ridge to the east of the Visitors’ Center. The actual MT-ID state line goes up the brow of the ridge from Lolo Pass, and as the road goes east from there, we didn’t realize until we were part way up, that we had ended up in Montana anyway. We weren’t very worried and continued on. This road is a good conditioning road for readapting to winter travel as it goes steadily up for 1 1/2 -2 miles/ 2.41k - 3.22k. We climbed up on what little snowbank was there to look at the stickers on the “Welcome To Montana” sign, then started up the road. Below the gate and a little above it, it was evident that people had walked their dogs up there, then eventually, in just a few inches of snow, found ourselves following a single track of two people walking, of about the same boot size and style. After a while we realized there were only tracks going up and none coming down, they wandered out onto most of the overlooks. Snow depth varied from a few inches in the more protected areas, to almost none in more exposed sites. Lots of larch needles had come down and in places the snow was more gold than white. There was lots of tracks, deer the newest, but an old set of what we figured were elk tracks, not moose due to shape, were everywhere, we even saw a spot where it had bedded down for a bit. There was also small round tracks, mostly on top of the snow that we guessed to be a small bobcat- it found the bedding site very interesting. At around a mile back the road makes a long switch back to the right, just below there is a stretch where alder brush and small trees are starting to take over the road.  We were still following the other people’s tracks around the curve, and not much further down a separate track went off and up the bank, but another set went into the start of a road section over grown with alder brush, we continued through the brush and for the first time saw return tracks. They had tuned back to follow the other set of tracks up the hill. It was hard to see how far the brush went on, but decided to continue on through the brush, lured by what seemed to be trees and open areas ahead. But not so, we came to a section of the road that had been narrowed by washout and larger trees, with only one narrow track to follow in which was a row of six to seven tall alder bush bases, all neatly spaced along it like someone had planted them. Beyond that was probably another 1/4 mile/ 0.40k of brush covered road to where the road ended on the ridge brow. Steve had ventured up hill and found there was still alder brush up there, but not as thick as down here. We followed and David went higher up more thinking maybe there was an old road bed up there, but no, and no better route than where we were about 25 feet/ 7.62 m above the road. Steve lead and we followed the road bank back to the other set of tracks then down to the road again. We started back and stopped for a snack brake before going down below the switch back. Our thermometers said it was just shy of  50 degrees/10c. It had been sunny, but now clouds were closing in, as we dropped down closer to Lolo Pass it got a little windy, but not unpleasantly so. This had turned into mostly a gear shake down trip and we went into the Visitors’ Center for hot chocolate before going back to town. Back home kitties were waiting for boots to come off -to play with boot laces and as we peeled off layers found larch needles and tiny alder seeds inside the layers. Hopefully when my next Lolo Pass Winter Outing comes up -on Dec.1st there will be enough snow so we can ski, snowshoe or what ever we want to do. 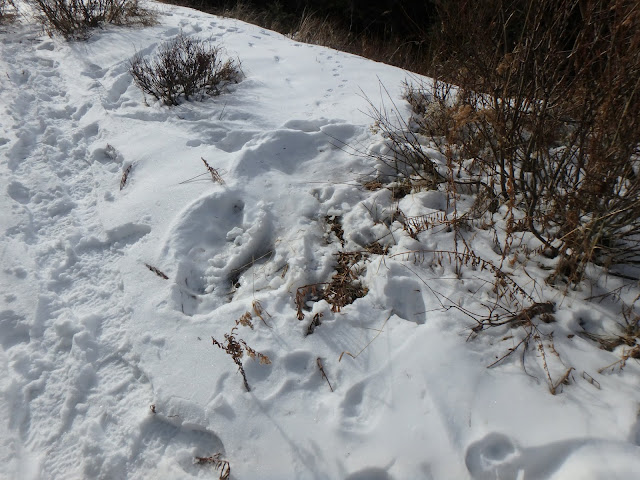