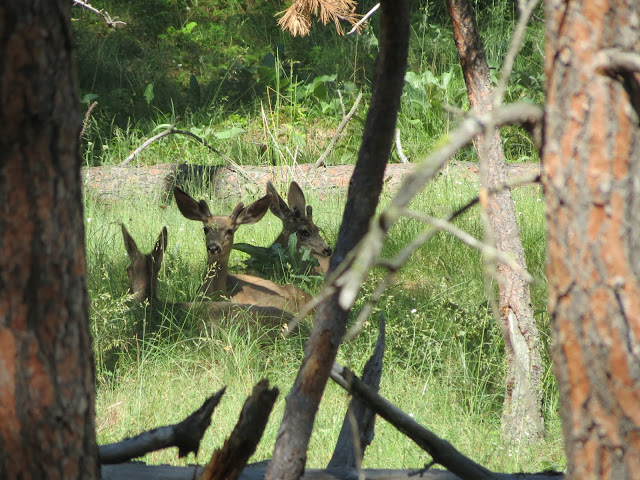 We couldn’t have asked for a nicer day, when we met at the Big Arm Boat Rental at 10:AM. Even the boat ride out to the Skeekoo Bay beach landing was pleasant, if a bit chilly. Once again I scoped out the island for the highest of its three points, knowing that the north summit, though it looked highest wasn’t. We were back for a second attempt to climb the highest point. As the boat came into the Bay there was a big buck, in velvet, just off the water’s edge, that tried to “hide” behind a tree, he couldn’t see us, but we could see most of him. We had brought 2 1/2 gallon jugs with water and stashed them in the shade by the landing. The new-comers checked out the signs and maps at the trail head and photographed a nearby osprey nest with chicks. Elizabeth set up the GPS on her phone, and as we headed up the trail out of the bay saw three deer laying down in the woods, now with the big buck close by. Some of us went to use the composing toilet as others went up to the top, where we would rendezvous by two old buildings. It was a really nice toilet, even with a shelf to put your stuff on. At the top we started down the only trail followed it to a junction with the trail down to Eagle Cove. From there we followed the trail over the base of the northernmost point to the gully on the other side. Here we compared GPS’s and based on what we had learned last year, decided to go up this gully to the “ridge” behind all three summits. A flight of vultures circled over the island as we were in this stretch. In the gully, the kids got to climbing on rocks, and as we stopped to take pictures of them realized there were bitterroots blossoming all around. New blossoms, they were still a very vibrant pink, and on the way up we did see one white bitterroot.  Also saw a rare white lupine. Still into climbing rocks John ended up going up on the north summit where Lisa had gone. For those of us still in the gully, towards the top we found a grassy slope that took us up onto the flanks of the middle point. After getting our bearing again and with Lisa and John having rejoined us, we hiked up to the top of the middle point to have lunch. It was clear here that the north point was higher, but the south point was also, and GPS showed it to be the 3700ft level we were seeking.

We parlied again, there was a deep gully between us and the south point. We could continue along the ridge behind the points, or if we dropped down it looked like there was a grassy ramp across the gully, but then we would have to regain our altitude. The ridge looked the “flatest” and we opted for that. But it turned out that flat wasn’t quite the right configuration. We soon found ourselves dropping down 40 feet or so from our 3600 ft level, into the top of the steep gully. Then climbed back up to the 3600 ft level to drop down into a second gully before climbing up to the summit. Each gully was steeper than the one before. Somewhere in here David picked up a ball of sheep wool, and we saw what was definitely bear scat, big bear. The summit was a grassy slope with a rock outcropping, we were all up there by 2:15, Julia had hung back to help the last part of the party find the best route up the steep slopes. We didn’t stay long on top, took the mandatory pictures and Elizabeth and Lisa were scouting another way out. We had already decided we were not going back the way we came. Below, with binoculars, we could see 5 bighorn sheep resting. Dropping off the south side of the plateau seemed the easiest and we chose various routes, dropping about 400 ft on steep rocky slopes, but didn’t have to navigate any cliffs. We rejoined at the bottom and started a long hot trek across the bases of the finger ridges of the high points. Here gully drops and climbs out were in the 100 ft range. We came across the remains of two rams, one still with some hide.

On the west side of the summit ridge we saw lots of lupine, owl clover just starting, asters, pussy toes, yarrow, wild hyacinth and the dominate tree was ponderosa. When we got onto the east aspect, climbing up to the summit, some Douglas fir showed up as well as mariposa lilies, arnica and wild hyacinth in profusion. One of the plants the girls had hoped to see was Indian paintbrush, I saw one on the way back down, a pale yellow one, growing tanged in with a arrow leaf balsam root. The arrow leaf balsam root was predominate, still blossoming below, but not above. We theorized that nothing other then bugs must eat it, due to its profusion and that we never saw any predatied plants. Eventually we made it back to our out-bound track then to the trail. At the trail junction the others decided to go down the trail to Eagle Cove and follow the trail from there back to Skeeko Bay while David and I stayed on the original trail. They changed their minds and all bushwhacked back to Skeeko Bay over the hill. I stopped to use the outhouse while David continued down to the beach, as he went down he saw a doe that had just given birth to two fawns, in the woods. We were all back to the beach a little after 4:30 for our 5:PM shuttle. We rested in the shade, drank our stashed water, and the kids cooled off by the lake. There was still a quiet wind and no one got soaked in the boat on the way back to the dock. Looking back at the Island now I could see the grassy slope that is the summit, but it still didn’t look higher from out there. The lady operating the boat showed us where there was an eagle’s nest on the west side of the island, and told us that a there had been a bear on the island but no one had seen it for several days, and that a few days before a family with small children had seen the wild horses kill a scared up fawn. (They are about the same size and color that a mountain lion would be.) It had been a great day, we greatly enjoyed having the children along, and glad for Elizabeth’s navigating.

Which way would be the better route to climb the high point? Hard to say, the trek across the base of the ridges would be easier until it came to the 400 ft climb at the end. Where as the “ridge route” we took had those steep gullies, they were at least in the shade and the elevation was gained over a greater distance, and you got to see a greater variety of terrain. 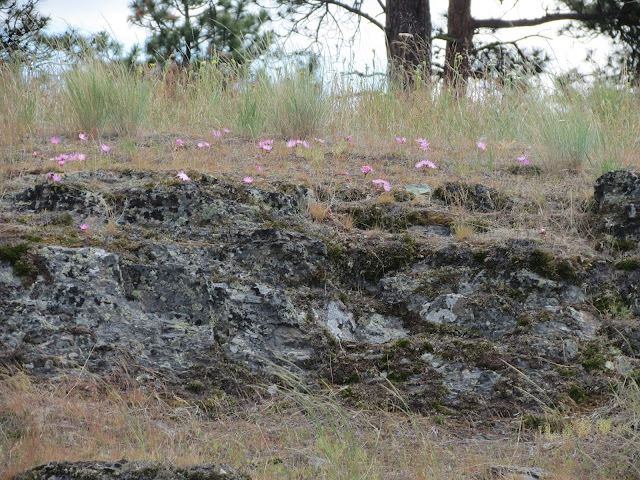 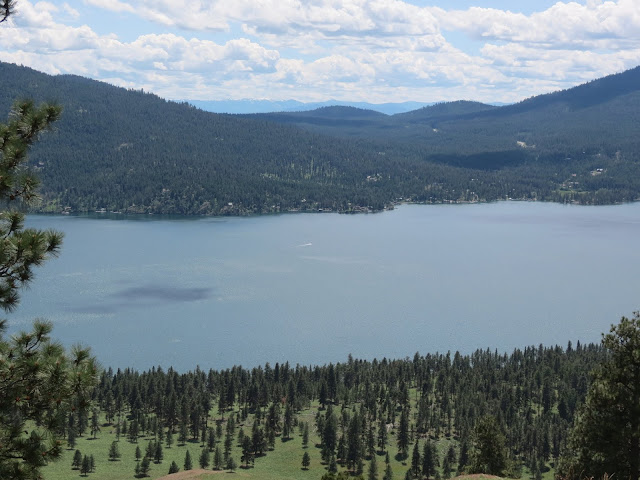 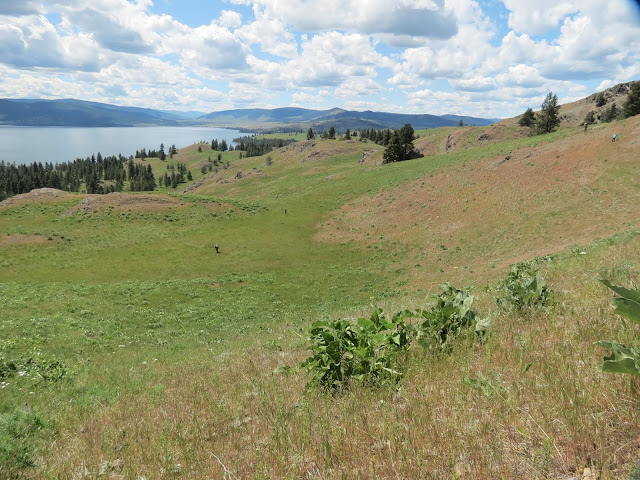