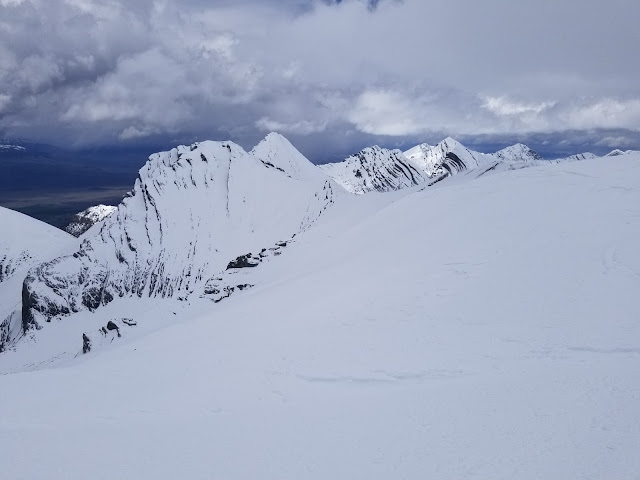 A solid group of eight of us decided to brave the very dismal looking Memorial Weekend forecast and head south for some fun in Idaho’s highest range.  Fintan, Rob, Erin and I drove south after work on Friday, leaving Missoula about 6pm and arriving at our “trailhead” camp a little after 11pm.  We fully expected to be setting up our tents in the rain, but were pleasantly surprised by starry skies when we arrived.  Sometime after midnight we dove into our tents and and called it a night.

We awoke to the predicted crappy weather (90% chance of precip).  None of us were too confident in climbing any peaks today, but sitting around camp wouldn’t be much fun, so after breakfast the four of us started up the Jones Creek drainage a little after 7am.  Our goal, should the weather somehow cooperate, was Donaldson Peak and/or Mt. Church- two of the 12,000’ peaks in the southern part of the range.  User created/game trails provided relatively easy hiking up the creek (later in the day, Carl and Evan actually found an old abandoned human built trail on the north slopes of the drainage).  I had made the decision NOT to bring skis today due to the intended route and perceived whiteout conditions.  At about 8400’ we headed up a branch of Jones Creek towards a 10,000’ saddle.  We hit the snow at this elevation- it wasn’t bad at first, but soon we were doing some postholing.  We also entered into the complete whiteout (clouds- not snow) and lost all sense of direction, navigating exclusively by GPS and intuition.  From the pass we blindly ascended to a small lake at 10,800’ that lies just below Church/Donaldson.  Here we started to climb the steep headwall that would lead to the saddle between the two peaks.  At about 11,000’, however, we encountered what I estimated to be an 18” layer of graupel under a couple inches of snow.  Not being very cohesive, we weren’t terribly worried about avalanching, but upward progress became nearly impossible.  Climbing another 1000’ in these conditions just didn’t make any sense, and so we turned around and headed back down the mountain.  On our way out we saw Carl and Evan heading up the main drainage of Jones Creek on skis.  They had arrived that morning.  They ended up getting to about 11,000’ on the west side of Mt. Breitenbach before enjoying a nice ski back down to the snowline.

The group of 4 of us arrived back in camp about 3:30pm.  We set up a 12x12 shelter and then huddled under it as a thunderstorm dumped rain and then heavy flakes of snow.  About 5pm Carl and Evan arrived back in camp, entirely soaked.  Brent and Abby showed up shortly thereafter.  We ate good food, drank good beer and whiskey, made a nice fire, told jokes, and listened to Fintan’s bubble gum music playlist.  A good evening was enjoyed by all.

Sunday, we rolled out of tents to a fairly nice morning.  Well, not all of us rolled out.  Fintan may have enjoyed the Tincup whiskey a little too much and he wasn’t moving.  Evan had destroyed his feet the previous day, so he and his dad Carl decided to head off to do some other things.  Brent was fighting some major mouth pain after some oral surgery, so he and Abby decided to take their dog and do a hike up Jones Creek (they also later set up a toprope and climbed on a crappy-rock cliff near camp).  That left Erin, Rob and myself for an attempt on Mt. Breitenbach.
We departed camp about 8:15 and hiked south along the base of the mountains through the sagebrush flats for about a mile- to Pete Creek.  Pete Creek was nearly entirely dry (water was running underground), so this provided a real easy method of ascending straight up the creek towards the south face of Breitenbach.  Learning from yesterday’s mistake (I am trainable!) we carried ski’s (Erin and I) and snowshoes (Rob) today, and at 8800’ we transitioned from trail runners into our ski/’shoe gear.  The weather was much better today with quite a bit of un-forecasted sunshine and only periodic squalls and storms.  I blazed a trail straight up to the south face at about 11,000’ over the next mile.  We were all separated at this time and going at our own speeds.  With weather potentially moving in, I texted Erin and Rob behind me, and then cut switchbacks up to the 11,960’ south summit.  From here the 12,140’ north summit lies about ½ mile away.  I left my skis and postholed along the narrow ridge, up and over a middle summit, and then to the true summit arriving about 1:20pm.  Took a few pics and then hustled back the way I came as ugly clouds were fast approaching.  I gathered my skis off the south summit, butt glissaded quickly down to 11,200, then texted my partners again.  Rob was at 11,100’ and thinking of going to the top, but with the storm/squall on top of us, he decided against it.  Erin had reached 11,000’ but had already strapped skis on and headed down.  The ski descent of about 2,500’ was pretty phenomenal!  We reached the transition area then hiked back out Pete Creek to the valley (hiking through yet another thundershower- this one lasting a bit longer than the first).  We arrived back at out Jones Creek camp around 5:00pm.  Weather cleared again that evening and we enjoyed more food, drinks, fire and camaraderie.

Monday morning we awoke to nice weather, then we packed up and headed home about 8:30pm.  It was a great weekend!  The NWS forecast essentially indicated we shouldn’t have even made the trip.  Each day and night called for precip chances in the 80-90% area.  I was pretty leery of heading down there with that forecast, but figured if everyone else was on board, then why not!  So, thanks partners!  “If you wait for the weather, you’ll never do jack shit!” 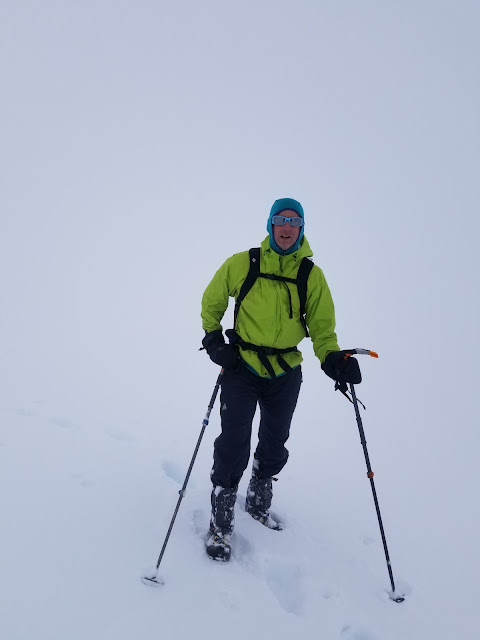 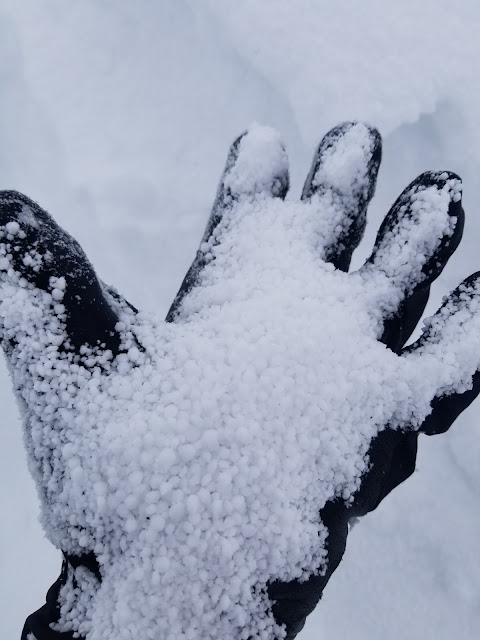 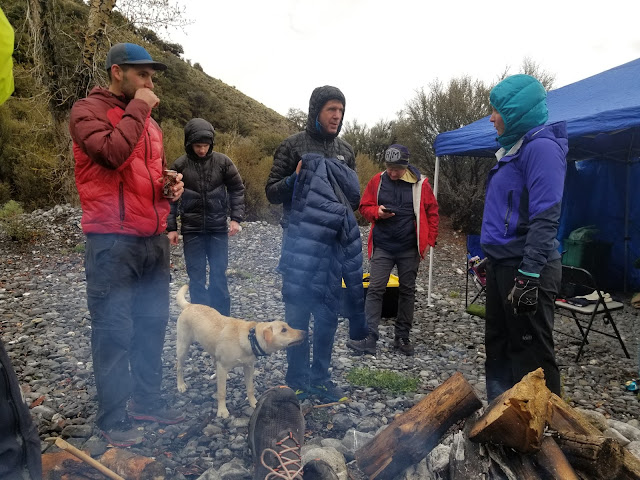 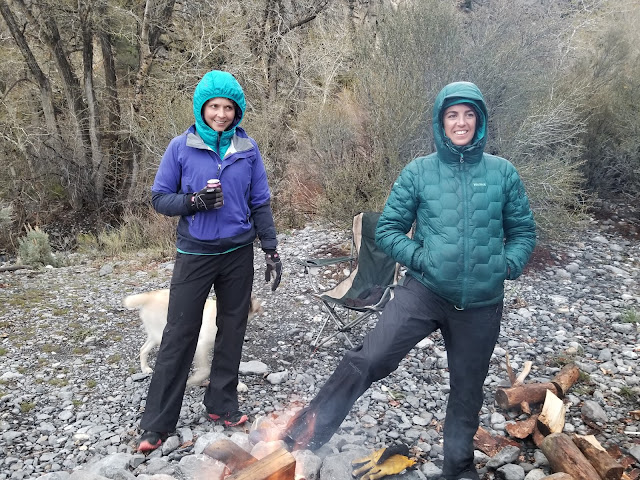 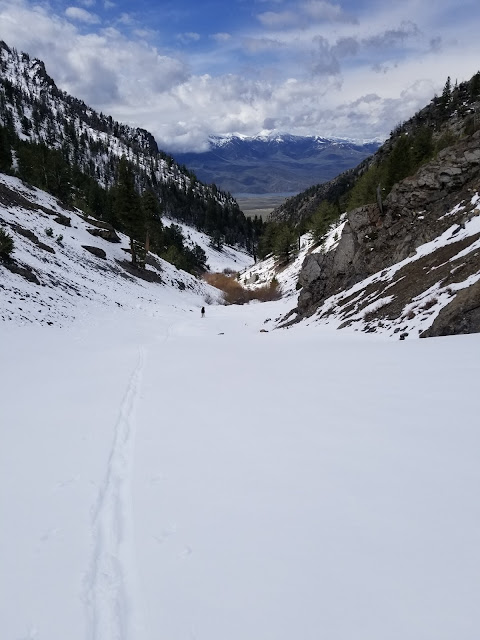 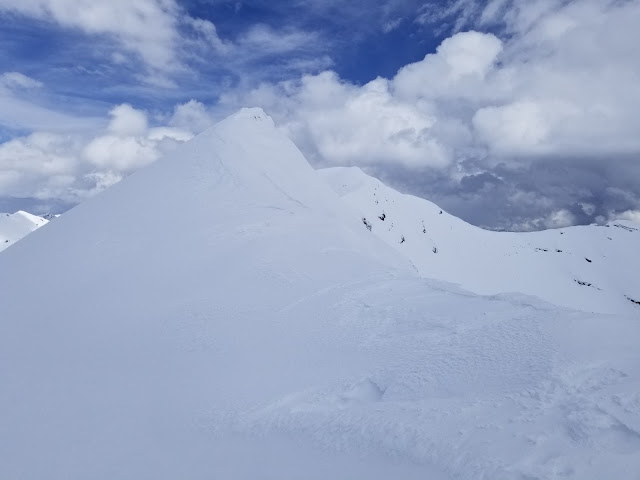