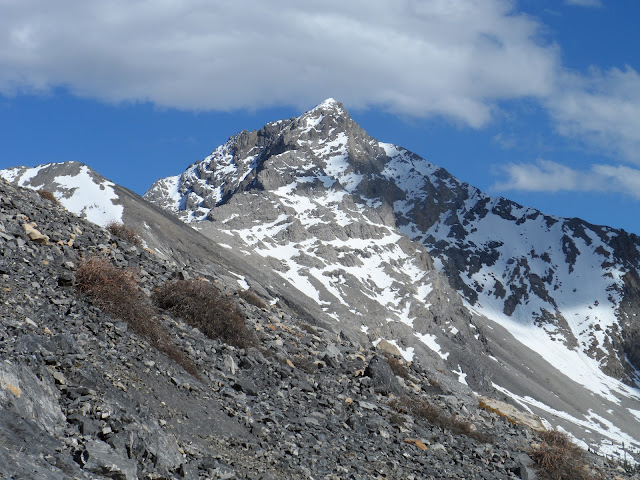 At 12,065’, Mt. Idaho is the 5th highest peak in the state of Idaho and one of nine 12K peaks in the state.  It is a very aesthetic looking mountain with classic ridges and faces and really just as appealing as its bigger neighbor a mile and a half to the north (Borah).   The plan for this trip was to climb the steep central couloir on the north face.

We drove down to the Lost River Range on Friday afternoon arriving about 3:00pm.  The best way to approach the north face of Mt. Idaho is to come in from the east (Pahsimeroi Valley) but I was reluctant to drive the rough roads to the Merriam Lake trailhead.  Thus we began at the Borah Peak- Chicken Out Ridge trailhead.  We followed this trail up the ridge for 3,000 feet before veering off to the southeast (Cedar Creek drainage) at around 10,300’.  From there it was a bit of challenging sidehilling over fist-sized scree as we made our way towards the ridge connecting Mt. Idaho to Sacajawea Peak.  Our original plan was to climb up to this 11,080’ ridge and camp there, but we wised up and decided to camp below the steep 1400’ final ascent up that ridge.  No need to carry all our camp gear up there!  We settled into a camp at 9600’ below the west side of that ridge at 6:30pm.  Dinner and then into bed at 9:30pm.  Beautiful, starry night!

Quentin was battling the onset of a cold and dealing with nausea, so when the alarm went off at 3:30am on Saturday it was only Minot and I gearing up (Quentin ended up hiking out).  We packed, ate a few morsels of food and started up at 4:30.  Temps were warm overnight so snow was soft and thus we ended up climbing mostly scree and talus up to the ridge- arrived at 6:00am and were greeted by a nice sunrise in the east.  From the ridge we had to descend about 600’ to the basin below the north face.  This was a bit steep in a couple spots, but we had no issues and were soon looking up the steep central couloir.  From a distance the route looks really steep, but once in it we guessed the angle was no more than 45-50 degrees.  We kicked steps for about 700’ to a point where it got a little steeper and icier.  Here we roped up and used a running belay for the last 700’ to the summit.  Arrived on top at 9:00am.  Grand views!  According to the summit register, we were the second party on top this year (two guys ski traversed the range over four days back in April!).  We snacked, drank and took pictures for almost an hour.  We then descended via the SW Face/West Ridge to a point where we could drop back into the Cedar Creek drainage- plunge stepping and glissading got us back down to a sublime meadow at the head of the drainage.  A quick hike back to camp- 11:30pm.

Minot and I packed up the remainder of our camp and began the sidehilling and trek out.  Three hours later we were back at the trailhead.  A fun 24 hour adventure- about 10 miles round trip and 6500’ of climbing.  A good moderate snow climb up a big Lost River peak.  Lots of ups and downs due to our approach, but hey….it’s all good training!
Forest Dean 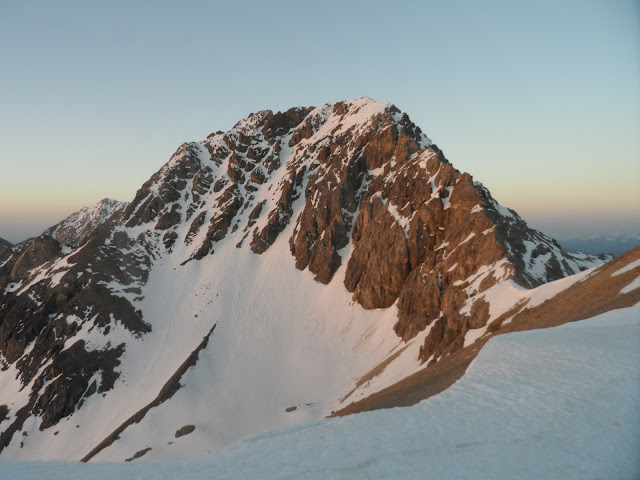 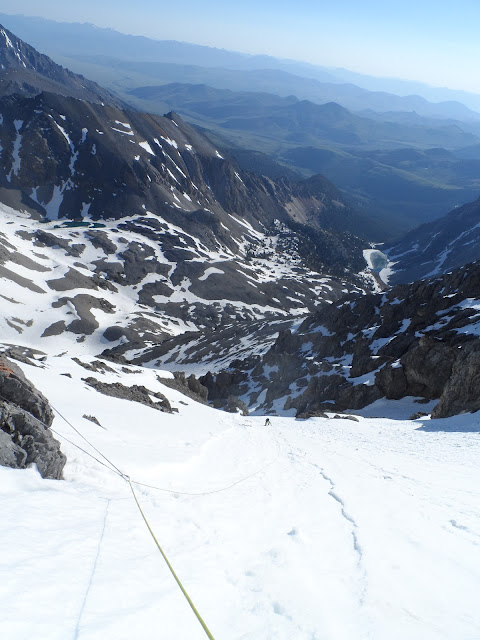