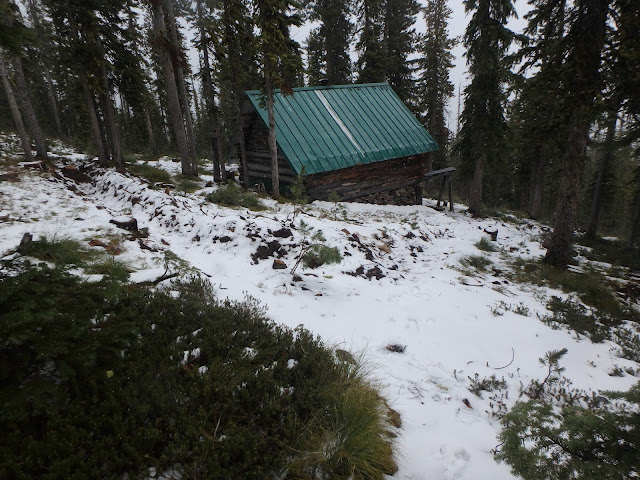 First the news everyone is waiting for: the Lolo Peak Fire did not reach the cabin, it came close, burning in the Larry Creek Gully just to the north of the cabin. The fire crews had done a duff-busting trench all around the cabin at various distances, and a lot of trees had been cut. As we were leaving the weather had cleared enough so we could see the Bitterroot Valley, to the east, below, much more of it -like major features such as the Bitterroot River- that we couldn’t see before. To the northeast we could see into The Larry Cr. Gully, and see the burned north rim. To the north was a large open space that hadn’t been there before. We didn’t explore that way, so we don’t know if the openness was due to burns, or maybe there was a major fire line on the south edge of the gully, where they had cut a lot of trees and stopped the fire there as it came out of the gully.

Five people met at Wal-Mart at 8:AM, trip leader Paul Jensen, his old friend Doug Grisham, and his dog Penny, Lois Crepeau and David and Julie Kahl. It wasn’t very cold but raining and windy. We headed up to the Bass Creek Overlook in two vehicles. The lower part of the road went through the Larry Creek backburn which they seemed to have stopped about 2 1/2 (4,02k) to 3 miles (4.83k) up the road, where the old Commune private property is. In this area the upside of the road had been sprayed with some type of pink fire retardant. At the overlook it was windy and the rain was alternating with grapuel, but we loaded up and headed up anyway, Paul carrying his chainsaw. The 30-40 mph (48 -64 kph) gusts buffeted us as we followed along the canyon rim, but we only saw one big branch come down. Paul and Doug marched right up, but the geriatric group, Julie, David and Lois were a bit slower. The trial is 1.7 miles (2.74k) long, with an elevation gain of 1200 ft,(365.76m), 500ft (154.4m) of which is gained in the last 1/2 mile (0.8k ), in the notorious switchback section, which was less windy as we were away from the rim. We saw the first snow patches at about 6500 ft.(1981.2m) and it was snowing by the time we got into the switch backs. There was maybe a 1/2 inch (1.27cm) on the ground around the cabin, and it snowed all the time we were there, with occasionally a gust of wind coming down the slope making it blizzard like.

Paul cut down several trees, Doug was splitting as we came up. The first thing we saw was a large bright green trap over the east half of the privy. Two other blue tarps were laying around. We went into the cabin and I unloaded the newspapers I had brought up for starting fires (so they didn’t have to burn pages out of the register). Lois and I started a fire and we sat and had lunch, did some cleaning, looked through the plastic box -found the cabin was well supplied with quality literature (see photo). Started to compile a list of things that need to be brought up, next time someone came. David, Doug and Paul joined us for lunch, then we all went out to finish the wood cutting. Doug and David split, Lois and I stacked. Not a terribly onerous task as most of the wood was still there from last year. Lois stacked kindling in the cabin. David and Paul made some adjustments to the sheet metal covering the under cabin opening, as it was intruding into the door space. They folded up and brought in the three tarps, all were wet. We spread one on a bunk to dry, managed to hang another from the nails on the north wall of the cabin (inside). The third we left folded up in such a shape that if it freezes up so it won’t open -that it could be pulled by the fire to thaw.

We had a second lunch in the warmth of the cabin, looked though the register, added more to the bring up list: a short handled push broom to easier sweep off the upper bunks, Paul thought a tall, bigger pot to melt snow in, would be nice, maybe a big coffee pot would work. A nice frying pan. I checked the radio as occasionally someone asks what kind of batteries it takes -4 AA. We commented on how nice chinking job. We also discussed the work Paul still wants to do in the cabin -lower the back bunk, somehow do something to preserve the -actual plywood- of the floor. Maybe put in larger windows -which should already be up there. We also discussed the problem of the back of the woodpile being older wood, and thought that maybe a weekend at the cabin over the summer might work to get all that done, next year.


The weather had cleared briefly as we headed back down around 3:PM, there was maybe an inch (2.54cm) of snow on the ground now. We got back in the wind when we got out of the switchbacks. At the trailhead it was snowing with strong wind gusts, we opted to go down to the Larry Cr. Group Site picnic area for our potluck, it has picnic tables under a pavilion. David and I had our usual brats and chips and dip and a thermos of hot water for drinks, beer. Lois had brought sloppy joes, coleslaw and cookies, and with a few other contributions, we had a good warm meal. Except that we had counted on Alden to be there and bring the dishes, but I had some stashed in the pickup and we made out ok. It was sunny and not too windy, we saw a cat like creature a ways away on a bare patch of ground. As we started to pack up to go home around 5:30 there was another bank of clouds moving in from the west. But we didn’t care, we had had a good day. Julie Kahl 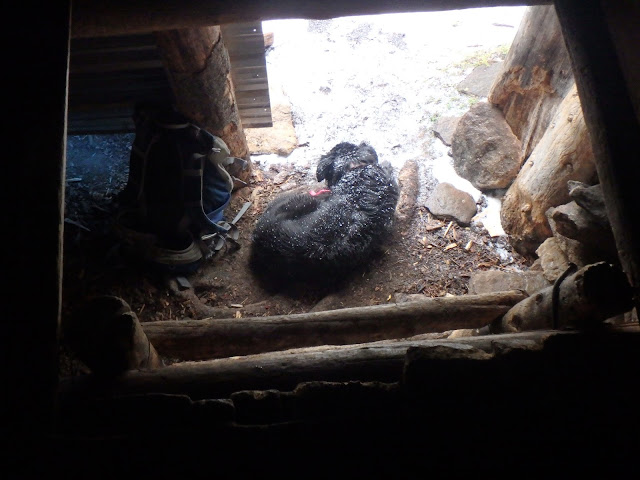 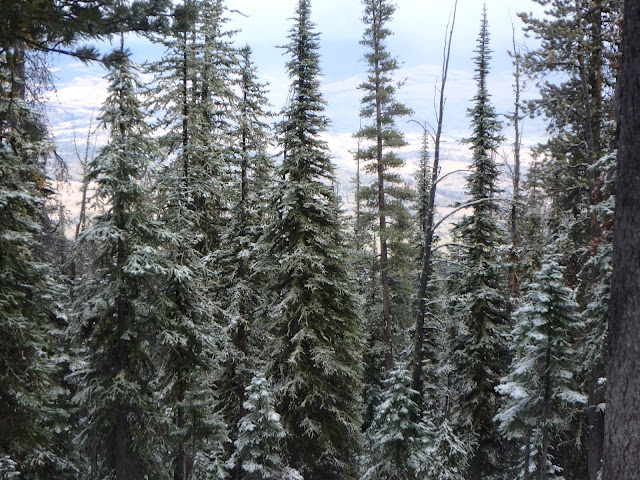