Sheep Mountain is known for being the high point of the best mountain biking and trail running loop near Missoula.  I have mountain biked the Sheep Mountain loop (starting and finishing in Missoula) many times starting in 1991, but I had never done the side trail (1513) that bypasses Sheep Mountain to the north.  So I proposed a hike that would start at the trailhead in Gold Creek, do trail 1513, and then return by way of Sheep Mountain.  Oliver Serang and Edna Blanchfield joined me on this hike.  It happened that Dave Robertson proposed to climb Sheep Mountain and we met his party of 4 at the trailhead.  We hiked together for the first 2 miles.There is a maze of logging roads shown on the way to the trailhead.  But in fact, most of the alternative roads are gated off, and there are only about 2 where one might be tempted to go the wrong way.  For those turnoffs, the obvious choice is the correct one, but it would help to have a GPS to be sure.

It took us about an hour to drive to the trailhead from Missoula.  We hiked up an old road for about 2 miles before reaching the Rattlesnake-Gold Creek divide.  Then we went east on trail 1513 for 100 yards, and then took the trail down into the East Fork of the Rattlesnake drainage.  Bow season was open, and we soon met 2 bow hunters returning to their truck after getting wet from the wet brush and some snow on the ground.   The forest was open and very nice to hike through.  After about a mile, we hit the junction with trail 1513.  Going to the right goes to the East Fork trail and down to the main Rattlesnake trail.  We went left.  We crossed two small creeks---the second had a good flow of water.  Then we did a quite steep (for a trail) climb up the ridge.  I pointed out some faint elk tracks that had been made while it was snowing the day or night before.  We had a good view of the cliffs on the north side of Sheep mountain.  For the sake of bikers who might be reading this, this part of the trail is too steep for anyone to ride up, and has steep switchbacks which would be very challenging to descend.  On the top of the ridge, we followed the ridge top rather than the trail which gave us a much better view.  Here we were walking though up to 6 inches of loose snow.  At the top, we enjoyed the excellent view (except for some clouds) from the rock shelter which was part of the old lookout.

Part way down the old road, we took a bushwacking shortcut which was much more interesting than walking back down the road.  We returned to the car at about 5 pm.  We agreed that this was a very nice hike. 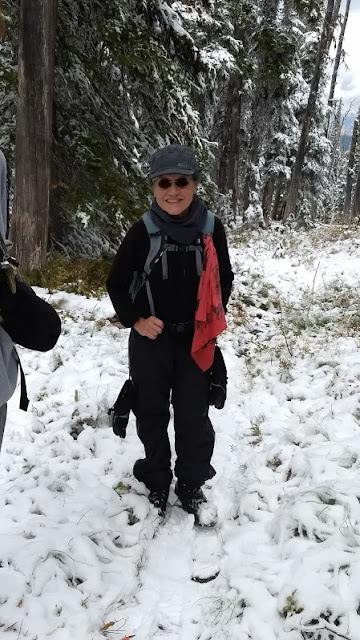 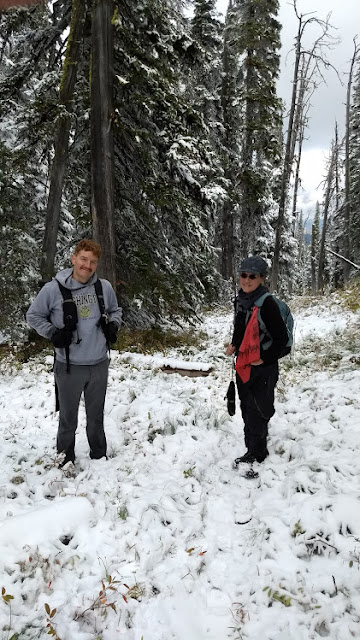